I read a lot of articles, chapters from books, watch and listen to lectures, but I haven’t sat down to complete reading a book from cover to cover in a while. 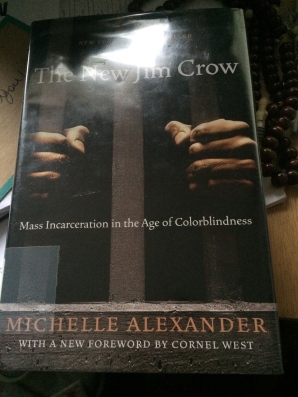 One of the books I’ve been eager to read is Michelle Alexander’s The New Jim Crow: Mass Incarceration in the Age of Colorblindness. I’ve seen her speak and listened to plenty of her interviews. Last week I finally decided to pick up her book from my local library.

Since I was maybe 10-years old and learned about the Thirteenth Amendment (Amendment XIII) to the United States Constitution which abolished slavery and involuntary servitude, except as punishment for a crime, I felt  that this exception in the thirteenth amendment was a loophole that could in practice re-enslave Black people.

Earlier this year, Michelle Alexander spoke at the Union Theological Seminary. She called the movement to end mass incarceration our current Abolitionist Movement.  Her choose of the word abolition struck a chord in me.

Many of us may not realize that even when Black people were enslaved in the Americas, many other Black folks were free. According to my family’s oral history, on my mothers side, some of our African ancestors came to the Americas freely and were never enslaved (I have to ask my grandfather more about this). What was the responsibility of those free Black people to those who were enslaved? I would like to think that if I were my free Black self over 150 years ago, I would have been working to free my enslaved brothers and sisters. Here we are in 2015  and too many Black people are still being enslaved through mass incarceration. One of the things that prompted me to ask “what can I do?” and finally pick up The New Jim Crow is the Rauschenberg Foundation’s  call to artists for project proposals that WILL FOCUS ON RACIAL JUSTICE THROUGH THE LENS OF MASS INCARCERATION. I didn’t apply for the grant because I am not doing any projects that deal with this issue, but I am so intrigued by the possibility that artists can effect some change in the incarceration of Black people in particular through our artistic practices. That’s a tall order! I know  there is so much more that I can do to think around and use my artistic practice to effect issues that I care about. Mass incarceration and reparations are two related issues that I am researching.

I’m also inspired by Michelle Alexander because she decided to write this groundbreaking book in the midst of giving birth to three children over the course of 4-years. Motherhood has given me a huge burst of creative energy too. I relate to her working between naps and at odd hours.

That’s also how I’ve kept my artistic practice going for my first two years of being a mom. That’s how I’m writing this blog post too. Time is precious and it has to be directed towards achieving important goals.  Becoming a parent has made me ask myself what more can I do through my artistic practice to impact the lives of other people and constantly create work that addresses the issues that matter to me.